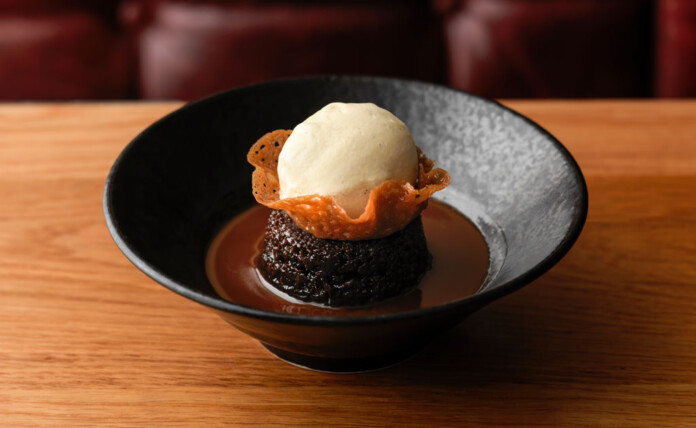 What better way to see in your new house by creating an absolute belter of a pudding. Full of those comforting flavours of dates and sticky toffee sauce. Created by Sarah Hayward, Head Chef at The Coach in Marlow, this really is an easy recipe that will certainly wow your guests

INGREDIENTS (Serves 4/6 depending on ramekin size )

For the toffee sauce:

Sarah Hayward is the Head Chef of The Coach in Marlow. She was born in Nottinghamshire and moved to the Isle of Wight when she was eight years old. Inspired to cook by her father, a Royal Navy chef, Sarah grew up around the sights and smells of the kitchen.

At 16, Sarah did a one-year apprenticeship at The Royal Hotel (2AA Rosettes) on the Isle of Wight working under Alan Staley. In 2010, Sarah then worked for Simon Radley at The Chester Grosvenor as an apprentice and left two years later as a Demi Chef de Partie. In 2012 she joined the team at Michelin-starred Lucknam Park and helped open the Cookery School, where Sarah enjoyed both the teaching element and the interaction with guests. She also worked for a year in the Restaurant Hywell Jones by Lucknam Park for a year, gaining invaluable experience.

In 2015, Sarah joined The Hand & Flowers, the two-Michelin starred pub from Tom Kerridge, after just three months she was quickly promoted to Chef de Partie. Then two year’s later, Sarah joined The Coach as Junior Sous Chef, before promotion to her first Head Chef role at The Bull & Bear in Manchester’s The Stock Exchange Hotel which opened in January 2020.

Sarah has worked for Tom Kerridge for seven years and now, coming full circle, she returns as Head Chef of The Coach, the one Michelin-starred pub in Marlow, a kitchen she knows inside out. Sarah will oversee a chef brigade of seven and with a small plate menu and an open kitchen, Sarah’s creative flair for ingredients and refined cooking is on show for all to see.