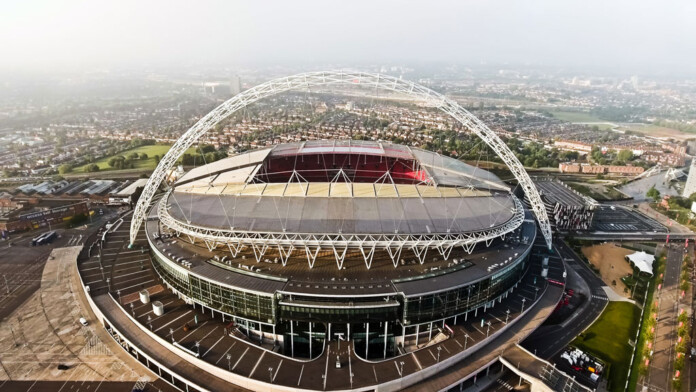 Host to countless historic football fixtures and acclaimed live music events, Wembley has welcomed millions of visitors over the decades. But there is a lot more to this suburban town, which has enjoyed an impressive regeneration in the 15 years since the new Wembley Stadium was first unveiled

Under the Spotlight
Wembley in north west London was reached by London and Birmingham Railways in the mid-19th century and by the 1920s had become an established suburb. Wembley Park was chosen to host the British Empire Exhibition in 1924, resulting in developments including the original Wembley Stadium. In 1965 the town became part of the new London Borough of Brent.

Dominated by the iconic arch of Wembley Stadium, the town now has a population of over 100,000 across the neighbourhoods of Alperton, North Wembley, Preston, Sudbury, Tokyngton and Wembley Park, which is almost unrecognisable from the unsightly industrial land and multi-storey car parks which greeted visitors in the early noughties. Brimming with new homes, offices and leisure facilities, the area has been transformed into one of the most exciting new neighbourhoods in London. Beyond the newly developed Wembley Park, Wembley is a vibrant, cosmopolitan town with a large South Asian community; the area in and around Ealing Road is fondly known as “Little India”, with dozens of restaurants, cafes and specialist stores offering the foods and fashions of South Asia.

Wembley is popular with families; there is a good choice of schools, with over 15 primary schools, including independent and faith schools, and secondaries including the highly rated Preston Manor School. Young professionals are also attracted by the area’s reasonable property prices, high-quality new build homes and accessibility to the city.

Located just 10 miles north-west of central London, one of Wembley’s biggest selling points is its proximity to the capital. The town benefits from three stations – all in Zone 4; Wembley Park on the Metropolitan and Jubilee Lines (12 minutes to Baker Street), Wembley Central on the Bakerloo Line (28 minutes to Oxford Circus) and Overground (fast services to London Euston and Watford), and Wembley Stadium (rail services to Marylebone). Preston Road and Wembley North also offer Metropolitan and Bakerloo Line services.

Wembley Park’s regeneration has seen an abundance of new developments built close to the stadium, offering a convenient and more affordable option for first time buyers priced out of Zones 2 and 3. Further out, there are plenty of property types to choose from including detached, semi-detached and terraced houses, mainly dating from the expansion in the 1920s and 1930s.

Out and About
Around seven million visitors flock to Wembley every year, and with good reason! Wembley Stadium, the country’s largest sporting venue, and the SSE Arena, an impressive art deco-style live music venue, both host incredible events and are right on the doorstep. It is, however, unlikely that you will be spending every weekend there, so what else does the area have to offer? Troubadour Wembley Park, a flexible 1,000 to 2,000 seat theatre, for a start, making world-class theatre easily accessible. There is also a nine-screen Cineworld multiplex cinema in London Designer Outlet.

Wembley residents are spoilt for choice when it comes to shopping, from the hugely popular Wembley Market to the London Designer Outlet promising up to 70% off RRP of big brands including Kurt Geiger, Superdry and Jack Wills. The High Road between Wembley Stadium and Wembley Central has all the high street favourites, including TK Maxx and Primark, in addition to more specialist independent stores. Wembley Central Shopping Centre also offers a good selection of high street stores. Slightly further afield, you’ll find Westfield White City with a remarkable 286 high street and designer stores along with 90
dining options.

While restaurant chains dominate the shopping centres and Wembley Park, there is also an impressive range of independent eateries to explore. Locals rave about Young’s Peking Restaurant on Harrow Road, and there are plenty of options to enjoy South Asian food too. Masti, on the High Road, would be a great place to start, particularly if you plan to make a night of it; the impressive venue also boasts a bar and club! Boxpark Wembley, in the heart of Wembley Park, offers an abundance of street food choices in addition to some alternative entertainment options. The dedicated “play” space includes activities such as axe throwing, free-roam virtual reality experiences and crazy golf.

Wembley also has a softer side. The Yellow, Wembley Park’s community hub, gives residents access to a gym, yoga classes, participatory workshops, and a broad range of local community events, while Wembley Park Art Trail is a great opportunity to relax while enjoying the vibrant murals and thought-provoking interactive displays. For a seriously serene experience, the Sanatan Hindu Temple welcomes visitors to enjoy its stunning architecture and elaborate Jaisalmer limestone carvings.

There are plenty of green spaces too. King Edward VII Park in Park Lane was bought by the local council in 1913 and laid out as a public park in memory of the late monarch. The park has over 250 acres of fields, woods and ponds and incorporates a bowling green, sports pitches, tennis courts and a playground. Barham Park, to the west of the stadium, lets you step back in time to the Victorian era with its beautiful walled gardens and also has a children’s play area.

1 Wembley Stadium and its impressive arch