At Home With: Richard Black 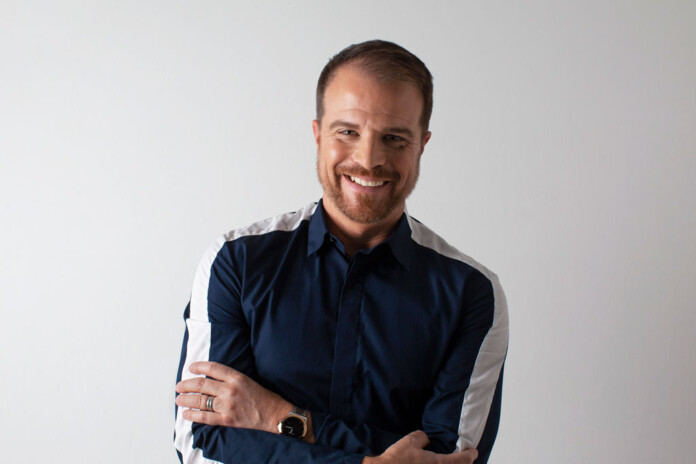 Richard could never have foreseen where his adoration for building entire towns out of Lego when he was six would take him. But, as an accomplished property developer and interior designer, and having worked in broadcasting for many years, he has just launched his exciting new property podcast, Home: Work. He talks to Lynda Clark about his first home, his brand new state of the art self-build home and gives some excellent advice for first time buyers

FTB: Tell us about your very first step on to the property ladder?

RB: I had just got a job on an ITV regional programme for Anglia, but it didn’t come with a very big salary and I wasn’t permanent staff and I didn’t have a contract, so getting a mortgage was an uphill struggle. I really wanted to buy a home of my own but I didn’t have a deposit. I didn’t let that deter me though, as I was able to convince my solicitor to use the cashback on a mortgage. This is a type of mortgage that pays you a cash lump sum when you successfully buy a house. It was tricky but it worked! So, I bought a top floor apartment in the centre of Norwich, which was pretty beaten up at the time. I bought it for £41,000 and it was a real journey – I still own it now and absolutely love it! I stayed with Anglia for two years and then eventually worked in London and in the Midlands. The flat was my baby and my sanctuary and I remember when I first rented it out for 18 months when I was working in London I was so devastated as it didn’t seem right to leave it.

FTB: Where do you live now?

RB: I got married in 2013 and we thought we had found our forever home in north Suffolk. It was a 500-year-old chocolate box thatched cottage. We even had our wedding cake shaped like the cottage as we truly believed it was going to be the perfect place to live. But we renovated it and then decided that actually it just wasn’t for us and started looking around at other properties. It was very sad but we were really not happy living there. Then, by sheer coincidence, I visited the village that my parents had moved to when I was a teenager. I loved the community there and had a great life growing up. By accident I saw a plot of land which was around two acres with a dilapidated cottage on the edge of it which was for sale. I didn’t think we could buy it but I just couldn’t get it out of my head and one day my husband, Steven, suggested we both go and look at. He thought it was amazing too, but it came with a hefty price tag, which was out of our league. We decided to beg and borrow to get the money to buy it, which somehow we did and we moved in the summer of 2017. We lived in the old wreck of a cottage and started building our dream home. We now have the most amazing detached house, on the riverside with woodland surrounding it and two acres of land. It has a thatched roof and is made from traditional red Norfolk brick and it looks stunning. Inside, it’s very modern with large south-facing windows which our two Beagle dogs, Oscar and Bobby, love to sit by. The house is quite a show-stopper – people take photos from the road as it is so charismatic and sits perfectly in the landscape. This is definitely our forever home!

FTB: Can you tell us about your career?

RB: I went travelling after I finished school as I didn’t really know what I wanted to do, although I always had a great interest in broadcasting. My careers adviser was very disparaging about this idea and said the only way into broadcasting is if you knew somebody who was already in the business and told me to do something more conventional! So, I decided to go away and see what happened. When I was in Australia I decided to pick up the phone and search for a job. I was very lucky as I ended up on Sky News Australia as a researcher for a discussion programme called Viewpoint.

I absolutely loved it and when I eventually returned to the UK I managed to get a job on BBC local radio answering the phones for a phone-in programme, which led on to me becoming a researcher. I then headed to London and did a stint working for Carlton Television. I also presented the news for BBC Radio Norfolk and was a producer at TV Centre for Breakfast for BBC One and the BBC News Channel. Although I love London, I wanted to return home to Norfolk and needed to take a step back as London can be quite unforgiving.

My first flat had been my guardian angel and when I was renting it out, the money helped me to buy another place and I eventually became a property developer with quite a sizeable portfolio. I have sold most of the properties now as I felt it was morally wrong to own my home and lots of flats and know that there are first time buyers who were struggling to get on the ladder and were desperate to have a home of their own. It just didn’t sit right with me.

FTB: You then had a complete career change. Can you tell us about that?

RB: During my career on radio and television I was lucky enough to do some amazing things. I went undercover with the police, worked on the launch of Strictly Come Dancing, worked with celebrities and even reported on Whitney Houston’s funeral. But I wanted to do something completely different. I had always been interested in the legal side of broadcasting and property and so I went back to university and studied law. It was such a complete change and I was suddenly surrounded by 20-year-olds! I got rather frustrated because in broadcasting you have to sum up the story in a few seconds, but of course with law they expect you to theorise and expand and do lots of research, so I always felt a 6,000 word essay could be done in 100 words if you got straight to the point. But thankfully I passed and I am now a qualified solicitor although I don’t practice.

FTB: Tell us about your podcast

RB: I have just launched a fortnightly podcast called Home: Work, which is for anyone who is interested in property. It’s done like a magazine and aimed at real people, real properties, real problems and realistic solutions. I am so excited as I have interviewed some fascinating people who I know the audience will love listening to. There is a couple in their early 70s who have bought a home on an island in a National Park which will take between five and 10 years to renovate. They said that all their contemporaries were downsizing but they wanted to do something mad and take on this incredible project – their story is so inspiring. The podcast is ideal to listen to in the car or on the commute on the train, and because it’s like a magazine there are lots of different stories, news items and lifestyle features.

FTB: What advice do you have for first time buyers?

RB: Don’t let your heart rule your head and keep your feet on the ground and not your head in the clouds. If a home is not right, or if it falls through, always remember there will be another one on the horizon.

Home: Work is available at thehomework.net or from your chosen download platform