Henry Holland: Top of the Game! 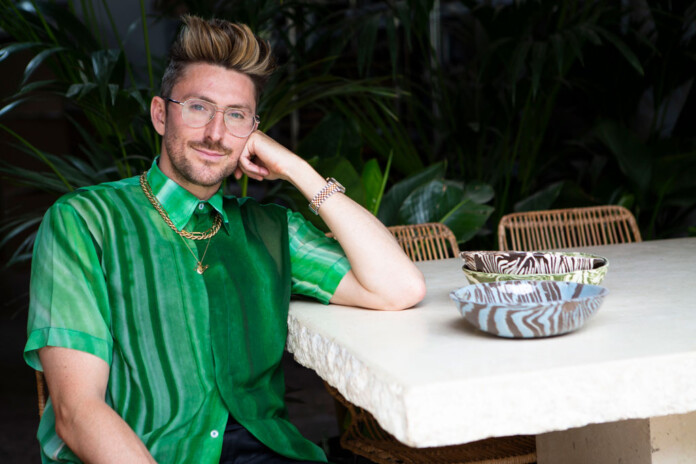 Henry Holland, one of Britain’s most influential designers, who rose to fame with his cheeky word-play T-shirts, has had a fascinating life and career. He has recently designed his first homeware collection for digital department store Freemans, creating an exclusive range of contemporary textiles, soft furnishings, accessories and statement furniture. He talks to Lynda Clark about how it all began, his new venture and gives some excellent advice for first time buyers

enry grew up in Ramsbottom, Greater Manchester, about which he said, “It wasn’t a very glamorous town when I was growing up, but now has a reputation of being a place that food lovers flock to, with so many award-winning restaurants and cafes. It has become very chic and fashionable.” He was very creative at school, which frequently caused challenges with the teachers as he was often distracted, but at home he had a wonderful childhood and his parents were always very supportive.

“My main aim was always to go to London, so when choosing which university to go to, obviously those in London were the only ones I was interested in. I saw it as a ticket to get away from the North and I was desperate for the bright lights and all the fun that London had to offer. I got some advice from a friend who suggested I study journalism, which seemed a very good idea and I ended up going to the London College of Printing.

“I lived in the halls of residence and there were lots of fashion students living there too, and I suddenly realised that I should be studying fashion as it ticked all the boxes for me. After four days, I asked if I could switch courses but sadly it was too late as they were full. They advised me to apply the next year but I am far too impatient for that and I started getting work experience with anything that was to do with fashion. It was so exciting and I did complete my degree. I finished college on the Friday and started as a full-time fashion assistant on a teen magazine called Smash Hits on the Monday. It was incredible working with clothes and beauty – I loved the relaxed atmosphere and I felt totally at home. It was a dream come true!”

Henry was enjoying life to the full and discovering all that London has to offer. “I was spending most of my nights at parties and clubs and meeting high-end fashion designers. It was from this that my T-shirts were born. I started making them for me and my friends to wear to parties. The T-shirts became totally iconic and were emblazoned with rhyming couplets and slogans about fashion figures. At that time, I became fashion editor of Bliss magazine. I never intended for them to become so popular, as I made them for a bit of fun and I certainly never had any concept of how to sell them. I began by selling them on my Myspace page but they exploded overnight and were stocked all over the world and were a sell-out in America, Asia and, of course, the UK. I was still working at Bliss and I was constantly asked to do interviews which I had to do in my lunch break.”

Eventually, Henry decided to leave Bliss magazine and start out on his own, launching his brand, House of Holland. “I left Bliss just after Christmas and was due to show my first collection at London Fashion Week in the February. It was such a whirlwind as I hadn’t really thought it through. I had the T-shirts but nothing else! I managed to get some help from the costume designer for Girls Aloud and we pulled the T-shirts down to make them longer and suddenly they became a dress! It was a very crazy but exciting time and I travelled the world and had a ball.

“I built up House of Holland with my best friend at school and if I met somebody who I thought had some talent I would hire them – we became like one big happy family. Although I had the time of my life, the pandemic suddenly hit us and we were struggling. We had a team of around 20 people and everyone put their heart and soul into the business. It was so hard and I was pretty broken when we decided we had to sell the business.

“Weirdly though, once it had gone I felt a huge weight had been lifted off my shoulders. During the lockdown, I kept myself very busy and once a week I went to ceramic classes. I fell in love with the process of creating something with my hands, which is so important to me. I put some of my work on Instagram and again it went crazy with orders pouring in. I hadn’t planned for this at all and couldn’t really keep up with the turnaround.” Working with ceramics set Henry back on track and his love of interiors began.

“I began talking to somebody who I knew from Debenhams, where my clothes had been sold, and they put me in touch with Freemans. I wanted to do a collection which was very accessible to everyone. I am proud of everything I do, so it’s been an exciting project and very refreshing. It’s quite a different evolution when you design for the home and I am totally inspired.”

Henry’s new collection includes everything from furniture and soft furnishings to ceramics, glassware and accessories. “I used to work with so many different colours, but for my homeware it’s much more subtle, playful and print driven. I will be working with Freemans for three years, which is very exciting and I just hope everyone falls in love with my designs.”

Henry and his husband moved home recently because “he needed more wardrobe space.” He bought his first house over seven years ago and they planned to only live there for a couple of years, but they liked it so much they decided to stay.

“It was in the most wonderful location and very near the park,” he says. “We first bought it in the October and by November we had the builders in doing some major structural work and renovations and it became an amazing little house. But we out-grew it and needed more space, so we decided it was time for a change. The new house is equally as lovely and we are still in the process of making it our home.”

When it comes to buying your first home Henry has some great advice. “Go with your gut instinct. When you first view a home, whether it’s rented or you are buying it, you will know immediately if it feels like the right place for you. When we viewed the house we have just bought, our French bulldog just strolled in, and we knew instinctively that it was right for us. Be open-minded about what you can and can’t do, as your home is very important and you can put your imprint on it to make it yours quite easily.”

Henry is so charismatic, and at the end of our conversation I felt I had known him all my life. As I’ve been pretty much housebound since Covid-19 started, my own house could do with a facelift and where am I going to look first? Freemans of course!

Shared ownership buyers don’t need help from the Bank of Mum and Dad!