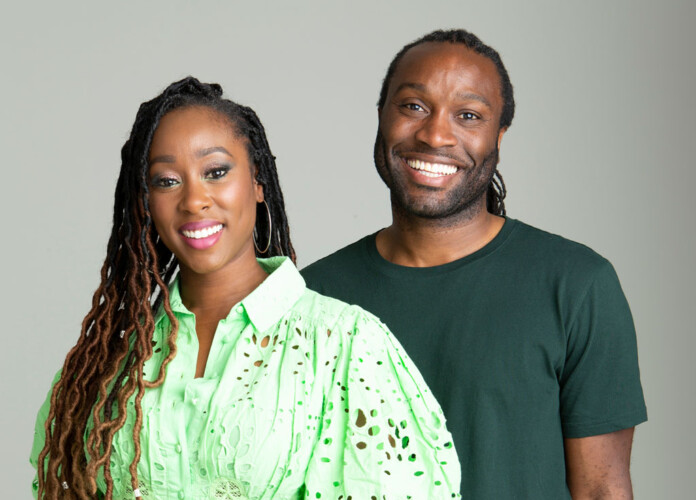 Siblings Scarlette and Stuart Douglas have always had a passion for property and their interior design and renovation business has proved to be highly successful for over 15 years. As well as co-presenting Channel 4’s new property show, George Clarke’s Flipping Fast, they will soon be hosting their own show for Channel 4, Worst House on the Street. They talk to Lynda Clark about their fascinating careers, their first homes and have some very good advice for first time buyers

Scarlette and Stuart were brought up in Cheshunt, Hertfordshire. Scarlette was always passionate about performing and Stuart and their other brother, Andrew, were both professional footballers. Andrew played for Arsenal and Stuart for Luton Town. As the boys were avid sports enthusiasts, Scarlette wanted to be like them and played basketball, hockey and football for Arsenal girls, briefly. She said, “I wanted to play rugby too but that wasn’t allowed.” She went to Laine Theatre Arts in Epsom, Surrey, when she was only 16 and stayed with a host family for the first year. “It was a very tough course and we worked a 12-hour day and they were very, very strict about everything.”

Her first job was assistant choreographer and dance captain for the pilot show of Thriller Live and she then travelled to Switzerland for eight months playing the role of Tina Turner in We Will Rock You. She was in great demand and appeared in many different musicals, made a fitness DVD called Street Fit and won a competition for MTV in conjunction with Freedom to become a presenter for a week, a win that was not only a great experience, but also landed her a presenting agent. She was one of the presenters for A Place in the Sun for nearly seven years, which she describes as a dream job, and has been all over the world finding homes for people who want to buy abroad. She was a regular reporter for The One Show on BBC as well as fronting her own prime time Channel 4 show, Holiday Secrets: Is Last Minute Best?

Having always been interested in property and interiors, Stuart asked her what she was planning for the future as she had no pension. Stuart was a footballer at the time and had developed a few properties over the years and so suggested she invest some money that her mum had given her, along with her own savings, to buy a place of her own. “My first property was a one bedroom ground floor Victorian conversion in Barnet. With Stuart’s help, we eventually turned it into a two bedroom apartment but it was a big learning curve.

“We had builders who were not up to scratch and didn’t complete works as planned in the schedule. As a result, we hired an independent builder to work on his own as his standard of finish was high, however, he physically moved into the property which was really unacceptable. In the end, I finished it off and I lived there for about eight months.

“We re-did the garden and I made a good profit when I sold it and by then I had the property bug and decided to buy another place in Enfield, which was a first floor apartment. I completely renovated that and created a lovely space.” Since then, Scarlette has bought and renovated many different properties and said, “I get such a buzz from each property I buy.”

Stuart became a professional football player at the age of 17 and even though he earnt a lot of money, he was always keen to save. “It’s my passion to save and I really thank my parents for encouraging us to get a good education and not squander our money on fast cars, but instead to save for the future.” He also has a passion for property and bought his first home at the age of 21. “It was in a converted hat factory in St Albans and was very quirky. I redesigned it and did some renovations; put in a new kitchen, bathroom and flooring and of course completely redecorated it. I really loved it but when I changed football clubs I decided to sell it as I needed to buy somewhere nearer the new club, a decision I have always regretted.

“Apart from really liking the place, I truly believe that there is no better return than bricks and mortar and so my interest in property grew and grew. I made a good profit on it and it proved to be the catalyst for me to buy and develop in the locations of the football clubs I played for. With the help of Scarlette, I have developed and sold numerous properties which has obviously helped me transition into the world of broadcasting. I was nominated for Best Debut Presenter at the New Voice Awards 2022 which was very special.”

They made their first television appearance together in a special edition of Kirstie Allsopp and Phil Spencer’s Love It or List It as part of Channel 4’s Black to Front project. But as it was for many people, lockdown proved to be a difficult time for them. During the third lockdown, Scarlette was sat at home one cold, rainy January afternoon and saw a casting call for a new property TV show looking for contributors wanting to flip properties. As this was her domain, she called her agent, Alex, to find out exactly what the show was about and if they needed a presenter.

He arranged a Zoom call and a screen test for not only Scarlette but also for Stuart was secured. A few weeks later they were offered the job co-presenting Flipping Fast alongside George Clarke. The show follows six teams across the UK who think they have what it takes to make the big time as property entrepreneurs, offering them a life-changing chance to start their own property business. Each are given a £100,000 investment to kickstart the business, competing against each other to see who can make a profit from property in just 12 months. The competitors get advice and support from George, Scarlette and Stuart and at the end, the most successful property flipper gets a cash prize of the £100,000 investment given to them at the beginning, plus their profit.

Scarlette said, “We love this series as we get the opportunity to offer straight-talking advice to budding property entrepreneurs. We don’t always agree on the methods, but when it comes to achieving the best results, we’re on the same page.”

Coming later this year, Scarlette and Stuart will be fronting a new Channel 4 series, Worst House on the Street. They will share tips and tricks to help thrifty homeowners pull off renovations far in excess of their budgets or expectations. It follows the duo using their expertise to help families transform run-down houses into dream homes without it costing a fortune! At the end of the project they will reveal how much their innovation and cost-cutting has increased the value of the property by.

They said, “Over many years, we have honed the skill of redeveloping properties while extracting the most value from the finances available. As brother and sister, our candid and honest relationship has helped us refine our process to achieve the best results. Together we have redesigned and renovated numerous properties, transforming them to become desirable and profitable homes.”

With so much property knowledge they have some excellent advice for first time buyers. “Research, research, research; as if you fail to prepare, prepare to fail. Look at the areas you are interested in and decide what is important to you. If you are a family does it have good schools nearby? Or if you need to commute does it have good transport links? If you decide to renovate a property then work backwards. Find your ceiling price and give yourself room for manoeuvre, as often the costs can run away with you, and then calculate exactly what you can afford. It is easy to put your own stamp on a place to make it your home when you work out what to do with the interior space and decorations.”

Scarlette and Stuart are both very talented and the future is looking bright indeed. I think this brother and sister act has a long way to go so… watch this space!