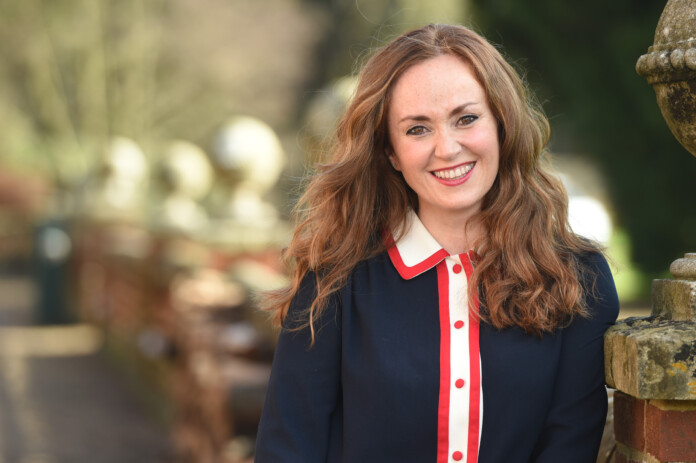 Martel Maxwell is a journalist, broadcaster and presenter with a fascinat ingand highly successful career history. She is now the latest presenter on the popular television show Homes under the Hammer on BBC1, which she  absolutely loves. She talks to Lynda Clark about her exciting life and her new home, and dishes up some good advice for first time buyers

Martel was actually born in London but her heart is most definitely in Scotland; Dundee to be exact. When she was only two years old, Martel’s parents split up and her mother Anne moved to Scotland where she brought her up. Her mother eventually remarried, and Martel, 40, has a sister Holly, 23, to whom she is very close.

“I had a wonderful childhood and I enjoyed school, then I decided to go to university which was pretty unheard of – I was the first person in the family to actually go on to uni. I decided that I would study law, mainly because I fancied myself as a criminal lawyer after watching the television series L.A. Law, which I really enjoyed. But I found that it wasn’t like that in reality at all and we didn’t go to court and wear wigs everyday – it was, in fact, really rather murky. I did my degree and then my diploma at the University of Dundee, which allowed me to practice law, but eventually I made up my mind that this really wasn’t what I wanted to do, so I decided to change my career path.
“I thought that maybe journalism was the route I should take, and strangely enough the two often go hand in hand. You have to have an investigative mind to be either a lawyer or a journalist.”

At that time emails were just beginning to take off, but Martel decided to handwrite a letter to every national newspaper to see if they would take her on. Eventually a woman who worked for The Sun had a spare five minutes and contacted Martel. “She told me about the first graduate trainee programme that they were launching and I decided to apply. It was pretty tough and there were 3,000 applicants. I wanted it so badly though, and I really did my absolute best. I actually called every other day to see if I had got the traineeship – I was that keen.”
Martel was obviously a shining star because she beat the other 3,000 hopefuls and began a two-year apprenticeship which started at London’s City University in its prestigious postgraduate print school. “It was such an exciting new start to my life and I loved every moment.

I knew that this was completely the right move and exactly what I wanted to do. I worked in the Manchester, Glasgow and London offices and even did a stint in Australia which was an amazing experience.

“So, after two years of training, I got a call when I was in Sydney from the editor who told me that he felt there were not enough women working in the role of city reporter. I was never great at maths or figures and to be honest I really wasn’t sure I was up for the job! It was very scary and I was confused about what to do for the best.”

She decided to take on the challenge and worked very hard; eventually she covered everything from news, features, sport and finally to Sun Woman where she covered women’s interests. But at that time Martel was a real party girl and enjoyed a very full-on social life. “People at work realised that I was always out and about and eventually I was headhunted and asked to join the Bizarre showbiz desk. It was an absolute dream job and I interviewed so many top-flight stars including Tom Cruise, Nicole Kidman, Sir Sean Connery and Kylie Minogue. I had a wonderful time and was constantly travelling and spending time on the red carpet!”

These experiences inspired her to write her first novel, Scandalous, which was a real insight into the world of showbiz. “It was really my own personal story but disguised; it was fun to write and I enjoyed doing it. But then I felt it was time for a big change as I couldn’t work in the glamorous world of showbiz forever. I decided to move on to the next stage of my career and thought about going freelance. But to be honest, I was very concerned that I would be giving up a good salary and pension. Then, one day when I was walking on the beach with my mum, she gave me possibly the best piece of advice I could ever have had. ’If it feels scary then it’s the right decision, so just go for it,’ she said.”

Martel did just that and she started getting guest appearances on radio and television and wrote an opinion column for the Scottish Sun. One thing soon led to another. “I had a regular show on a radio station in Edinburgh every Saturday morning and as I drove a convertible car someone thought I was a real petrol head and asked if I would co-present a car show. Actually, I was already interested in cars as my mum had been a car saleswoman – so it was really the perfect job! I would say that I was a real grafter and turned my hand to so many different things.”

For seven years Martel covered all the showbiz news on the Lorraine Kelly show and she reported on what was happening on the red carpet. Around this time she met up again with a man who, back in their schooldays, was the first boy she had ever kissed! “I had met Jamie when I started school at five and had kissed him when we were teenagers. We never really lost touch and we met up every so often with other friends. Eventually, we were both going to a music festival and afterwards I invited him to a party at a friend’s house and I suppose you could say we never looked back after that. We ended up living in my flat in London and are now married with three gorgeous sons.”

Very sensibly, Martel had decided it was a good investment to buy a property in London, which she has only just sold. “I saved up for a deposit and it was much easier in those days to get a mortgage. My mum’s husband helped me out as well and it was great when I recently sold the place and paid him back. As I did a lot of work in Scotland I was always rushing back and forth and it was tough at times. Jamie loves the countryside but I am more of a city girl.

We decided that we should move back to Scotland permanently when I was heavily pregnant with our first son, but we looked for ages for a home that suited us. We searched all around the Dundee area but nothing seemed right; so in the end we decided to build our own place, which was quite an undertaking. The plot had no water or electricity and it really is in the middle of nowhere. It was exciting but stressful for a time, although luckily we lived in a flat while the work was being done. We had two young sons at the time so you can imagine how hard it was! I started to feel a lot more relaxed once the foundations were in, but it took about a year to finish it. We have five bedrooms which seemed massive to start with, but now we have three boys it doesn’t seem that big. The garden is lovely too, so the children have plenty of space to run around and left off steam.”

When Martel was pregnant with her third child she had a meeting at the BBC where she was asked if she would like to do a screen test for Homes under the Hammer. “They knew I had always had an interest in property and even though I was pregnant I got the presenter’s job as. It’s such a great role and I love every second of it. The team get on so well and it has a huge following. I get stopped in the street sometimes and people are so complimentary and are keen to tell me their stories.”

Having worked and been involved in property, Martel has some excellent advice for first time buyers. “It is a scary prospect to buy your first home and I do think that fear stops a lot of people taking the plunge. I think that doing research is probably the most important aspect to start with – if you know anyone who has recently bought a home then talk to them and really pick their brains. Getting a deposit together and saving is very hard, and sometimes impossible, so it is a good idea to ask a family member if they can help. Of course you can pay it back when circumstances allow you to, as I did after borrowing from my mum’s husband.

“Also, be inventive about where you look for a place and think outside the box. Prices in central London will be sky high, but decide what you can really afford and think about commuting from the suburbs. Definitely consider looking at places that are being regenerated, as buying before they become too gentrified means you should get a good deal and the property will eventually go up in value. You should also consider what you are really looking for and what your needs are. For example, is location your biggest priority? Or transport links, or schools? How many bedrooms do you need and do you want to have outside space? The answers will be very different for everyone. Think carefully, but by taking the plunge at least you will have a foot on the ladder and most people don’t stay in their first home forever. Sometimes it is a good idea to consider buying off-plan as you often get a better deal at the development stage. Finally, some first time buyers might want to make a real investment and decide to buy a home and rent it out. You can pick up something in Wales, for example, which is a real bargain.”

Martel certainly has a bright and busy future ahead of her. She has plans to write more books, alongside combining her talents with Homes under the Hammer, running a home and being a mum. She has a great deal to look forward to and I’m sure we will be seeing a lot more of her.

Homes Under the Hammer is on BBC1, weekdays at 10am