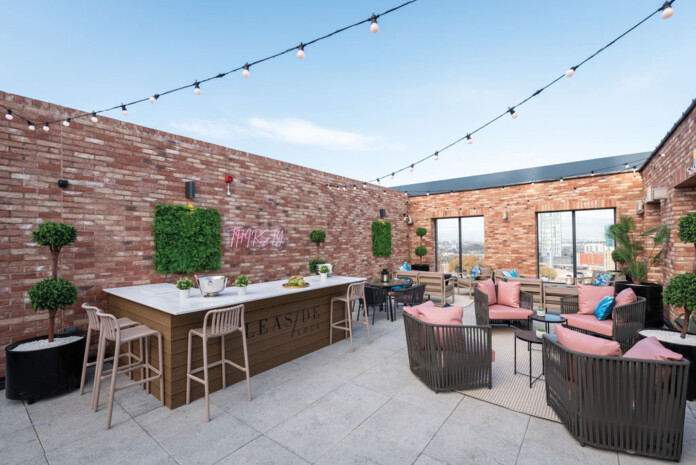 Elevating everyday life in east London’s coolest new hub, Leaside Lock offers a collection of stylish studios and one or two bedroom apartments in Bromley-by-Bow, E3. Promoting a holistic lifestyle day-to-day, this sought-after new development comes with unbeatable indoor and outdoor amenities, perfect for the warmer months. Residents can start their day energised at the proposed on-site health and fitness studio, followed by a productive work day in the stylish co-working space, rounded off with a rooftop drink on one of the chic roof terraces

Offering first time buyers the chance to get in early at this major housing project, all homes are available to purchase through shared ownership or Help to Buy London, and there has been unprecedented demand since its launch in mid-November 2021. A major placemaking project, Leaside Lock will ultimately deliver 965 properties by Guinness Homes.

Set on the banks of the River Lea, the development is situated in the heart of Bromley-By-Bow. Phase One of the development comprises five striking buildings, creating a dramatic new gateway to the East End. Three red brick buildings reflect the area’s industrial heritage, while two pale green pre-cast concrete towers echo the nearby mossy tones of the River Lea tideline.

Inside, the apartments are finished to a high specification throughout. Perfect for whipping up a delicious feast, the contemporary kitchens come complete with integrated Bosch appliances, while bathrooms and en suites are finished with sleek sanitaryware. Underfloor electric heating is fitted in every apartment, and all residents will have access to a podium garden. A number of blocks will have roof terraces, offering spectacular panoramic views across the city, while providing a communal space for entertaining and socialising with neighbours and friends.

Evenings can be spent enjoying local east London hotspots such as The Galvanisers Union, which boasts an impressive menu of craft beers and is renowned for its roasts and for its hilarious weekly comedy nights. Also nearby, Shoreditch has a thriving food and drink scene with a multitude of places to eat, from quirky independent cafes to trendy chain establishments.

The ideal spot for residents to reconnect with nature, waterside living comes into its own at Leaside Lock. A tranquil stroll along the River Lea will take you to the Limehouse Cut, the oldest canal in the capital. For local green spaces, Three Mills Green is just under a five-minute walk from the homes at Leaside Lock, while a wander through Bow leads to Mile End Park, a canalside spot offering cafes and sports facilities. For an Olympic-sized day out, the new development is just an eight-minute cycle along the river towpath to Stratford and the Queen Elizabeth Olympic Park.*

Residents can also benefit from superb transport connections across the capital, with Bromley-by-Bow Zone 2 London Underground station just a three-minute walk away, connecting to central London and out towards Stratford on the District Line and Hammersmith & City Line. For those travelling further afield, nearby road links offer direct journeys to London City airport, as well as roads out of the capital.

Is definitely Production Control Right For Your Business?