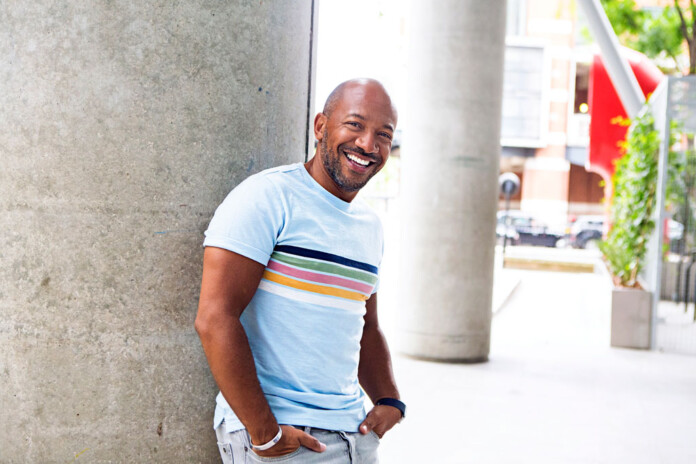 Craig Rowe has recently become one of the latest presenters on Channel 4’s A Place in the Sun, and has also presented for ITV’s This Morning, the Discovery Channel, Sky Travel and QVC. He has a real passion for property and has bought and renovated several homes. He has helped friends and family when searching for, negotiating and then transacting a property purchase, and happily tells them, “I will be your real life Phil Spencer!” He talks to Lynda Clark about his first home, his exciting new job and gives some excellent advice for first time buyers

Craig grew up in the 70s on the outskirts of Bristol and had a very happy childhood. “My mum was Welsh and my dad was from Jamaica and although we didn’t have much money and it was quite tough we were always loved and well cared for. It was not an easy time for people coming to England from abroad, as they were invited over to help the economy but had a rather frosty reception. My dad worked very hard and was a tiler and plasterer and I often wonder if this is where I get my passion for building and renovating from. My mum looked after my sister and I, but she also did night shifts at a bakery – so it was hard going.

“We lived in a council flat until I was about 10 and then we moved to a different area and got a council house. It was amazing and I remember being fascinated that you could go up and down the stairs! I loved the garden and there were children of a similar age who lived next door and I enjoyed playing with them. The turning point was that after many years my parents took advantage of the Right to Buy scheme and actually bought the house. It set them up and after years of working hard and paying the rent, they actually had a home of their own. Again, I think that this must have instilled in me the impetus to own my own property as soon as I possibly could.”

Craig was good at school and always enjoyed English and creative subjects like drama and music. “I scraped by in maths and science subjects but I always wanted to be an actor and won trophies at festivals, but although my parents were very supportive they always told me that my education came first. I studied European languages and Business at university and thought about becoming a translator, but acting was my real passion. Channel 4 advertised that they wanted a new presenter and it brought back all my ambitions of wanting to be a performer so I applied and was shortlisted to the final 10. I didn’t get the job, but it was a great experience and the start of a new chapter in my life.

“I was always good at languages and speak French and conversational German and Spanish. I love travelling and decided to take some time out and took a year to go around Australia, Thailand, Singapore, the USA and Jamaica. I then started work in production for the BBC and worked from production assistant in the studio and on location to promo director, live gallery director and producer and production manager. I also led hundreds of workshops on TV training for BBC new recruits. In my spare time, I used to practice and do little clips of myself which ended up as a showreel, which I sent to producers and production companies. I was lucky, as a friend who was a casting director was looking for somebody for a new channel called BroadbandTV and I started working there in 2004. From then on, I haven’t looked back and I have worked on many different shows.”

Getting the presenting work on A Place in the Sun though has been a dream come true for Craig. With his love of travelling and property it ticks every box. “I had worked with an agent for many years and although we were not actually doing anything together at that time we had become good friends. She called me in 2021 and said that A Place in the Sun was looking for new presenters and would I like her to put me forward for it. Of course, I was very excited and jumped at the opportunity. I had to send my bio, details of my property and travel experience plus a 20-second video explaining why I was the ideal candidate. Luckily, I had just finished renovating my house and so the kitchen looked perfect. So, I set up in there to do the recording and I wore a bright yellow polo shirt as I wanted it to look sunny and uplifting.

“It was actually 22 seconds long and I was paranoid that they would not look at it as I had overrun. I spoke to my agent friend and she said not to worry. Then 16 of us were called to do an audition and I was blown away by that and then they whittled it down to the last six. Finally, I was told that I had been selected along with Leah Charles-King. I just couldn’t believe it and was completely overwhelmed. I couldn’t tell anyone for a long time as they were due to make an official announcement and they didn’t want to do that until I had filmed the first episode and it had gone on air.

“Then in December I was asked to go to Spain to film and I clearly remember the first couple I helped who were wonderful as I was obviously the newbie! Since then I have filmed in France and Barbados and done a couple more episodes in Spain. I am now on schedule to film one or two episodes a month, every month of the year, so I am going to be super busy, but it’s absolutely the best!”

Craig has always had a passion for property and bought his first home at the age of 25. “I bought my first home in 1999 in Harlesden in north west London. I had always been determined to buy in my mid-20s as I had been to university, lived in various house shares and went travelling for a long time and I really wanted to set down some roots! I was working in production for the BBC, behind the scenes and at weekends I was a tour manager taking groups of people round Europe, and in the evenings working in a bar. I had to work so hard so I could get my deposit which even then was hard going.

“When I first started house hunting I wanted to live in Kensal Green but it was too expensive so I decided to take a look at Harlesden, which was more affordable. I found a one bedroom place but then a friend from the BBC asked me how I got on with my sister and I told them I had a great relationship with her. He then suggested we should think about buying together and then we could go for a two bedroom home. It was great advice and we bought together and it worked out really well.

“It was so much easier living with a family member as we could be honest with each other, unlike living with flatmates where you have to be careful what you say all the time. We bought a ground floor flat in a Victorian conversion. I actually bought it from the freeholder who was moving back to Jamaica. He obviously had a very different taste to us as he was a 60-year-old man so it looked very dated. I modernised it and opened up the kitchen and changed the outside space and landscaped it as well.

“We lived there together for about four years and then she decided to move back to Bristol which is our home town. I remortgaged and bought her share and lived there for about 15 years and I still own it and rent it out. My partner and I have decided to sell it now and use the money to buy a home either in London or the south coast. Renovating has always been part of my life and I fell in love with DIY and I really enjoy any kind of home improvements. When you work on your own home it is for you and you take great pride in it. I did all the usual things like go to IKEA to buy floorboards and furniture and it looked really good.

“I then bought a place which was a converted steel works in Harlesden and renovated it but sold it soon after. It was never really my home as I rented it out but I did make a small profit. I then bought an ex-local authority 1970s two bedroom maisonette in SE1 which I renovated and modernised. It was quite compact so I have opened it up and it looks amazing! It is on the first co-operative estate in Southwark and the residents all have a say in what we do so it is very progressive.”

Craig has some excellent advice for first time buyers and said, “You might have to compromise on the area you want to live in but think of this as positive as you will have taken that first step on the ladder. This is exactly what I did as my first home in Harlesden was not really a desirable area then but now I am in Borough which is booming and really gentrified.

“Consider buying with somebody like I did with my sister, especially if finances are tight, but it is absolutely essential to make it legal and get the proper agreement drawn up by a solicitor. Save like a crazy person and be prepared to make sacrifices. Expensive dinners, exotic holidays are all going to cost money – I remember my friends and I used to go out dancing and drink water all night – I had a great time and didn’t spend anything!

“I had three jobs at one stage in order to get enough money together but looking back I wouldn’t have changed anything as it helped me achieve my end goal. Make a plan, try to take the emotion out of it and stay focused and be patient with yourself as buying a property always comes with lots of ups and downs. Take time and don’t rush and put pressure on yourself. Be philosophical, as even if the property you want falls through you will always end up in the right place!”